(Work in Progress, to be continued)
Since before the Second World War, Italy has been a prolific designer and producer of small submarines. The CA and CB-class midget submarines and their operational histories are already well-known, but those produced post-WWII are much less known, poorly documented and the subjects of confusion and misinformation. Fincantieri, Maritalia and Cos.Mo.S. are all known to have produced viable small submarine designs, however only Cos.Mo.S. is known to have definitely produced actual small submarines, albeit all for export.
This file is intended to serve as a repository for actual and projected post-World War 2 Italian small submarines designs. As always, comments and additional information are welcomed.
Cos.Mo.S. SpA, Livorno
Overview
Over the course of its 48-year history from 1955 to 2003, Cos.Mo.S. is believed to have produced a total of 24 midget submarines. Of these, 20 were delivered to five export customers, three were sold to Iraq but never delivered, and one remained at the Cos.Mo.S. factory as a demonstrator and developmental testbed. For further information on Cos.Mos.S. history, see separate entry under Italian Chariots.
Because of Cos.Mo.S' very secretive business practices, it may never be possible to completely ascertain all their boats' deliveries, but the most likely breakdown of their actual midget submarine deliveries is as follows (Provisional):
Type Date Quantity Customer
SX-404 1969 2 Taiwan
SX-404/B 1972 6 Pakistan
SX-506 1973 2 Colombia
SX-506 198? 2 Republic of Korea (i.e. South)
SX-756/K 198? 5 Republic of Korea
SX-756/W 1985 3 Pakistan
SX-756/W 1989 2 Iraq (never delivered)
SX-756/S 1989 1 Iraq (never delivered)
MG-120/ER unknown 1 Demo boat retained at factory
Cos.Mo.S' midget submarine designs were an ongoing evolution and expansion of essentially the same design over the course of 45 years from the mid-1960s to the company's demise in 2003. The company frequently marketed the same design under different designations to multiple potential clients. The reason for this practice is not known; possibly it was intended to reduce the possibility of clients becoming aware of each others' capabilities and Cos.Mo.S' relationship with them, or possibly it was simply to create the impression that Cos.Mo.S produced and sold more units than was actually the case. 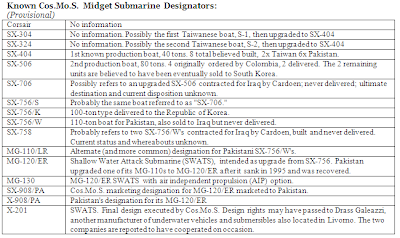 SX-404 was Cos.Mo.S’ first known venture into midget submarine design and production. This was a 40-ton boat intended to transport naval SOF operators into hostile waters over distances greater than those that could be achieved by the company’s Chariot swimmer delivery vehicles (SDVs). All Cos.Mo.S’ midget submarines were designed with the capability of carrying two of the company’s CE2F-series SDVs.

Cos.Mo.S built two subvariants of this design, the SX-404, two examples of which were delivered to Taiwan, and the SX-404/B, six of which were delivered to Pakistan. The two subtypes are easily distinguished from each other by the presence or absence of a large horseshoe step on the sail. Pakistan’s SX-404/Bs have this step, Taiwan’s do not.
Displacement: 40 tons
Length: 59.1 feet
Width: 6.5 feet
Draft: 8.4 to 10.4 feet
Surface Speed: 10kts (designed), actual 4kts
Submerged: 7.2 kts
Max depth: 131.2 feet
Range: 1235 nautical miles
Crew 4 Officers, 2 NCOs, 6 passengers
Payload: 2 SDVs (CE2F Chariots) 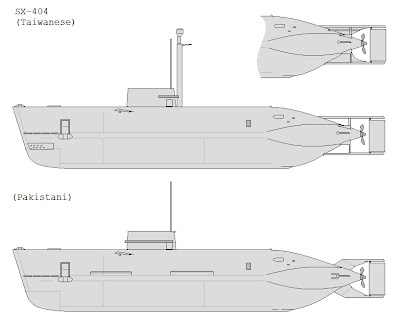 SX-404 (above) and SX-404/B (below), showing evolutionary changes between the two sub-types
SX-404
Taiwan
Taiwan was Cos.Mo.S’ first midget submarine customer, taking delivery of two in 1969. As originally delivered, Taiwan’s boats had rounded bows, which were later modified to the more common ship-type bow seen on most other of Cos.Mo.S’ boats. The two boats, S-1 and S-2 served until 1973. Both boats are preserved and are on public display at the Taiwan Naval Academy. 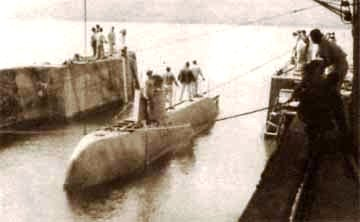 Taiwanese SX-404, final configuration
source: Cos.Mo.S. SpA
SX-404/B
Pakistan
In the late 1960s, Pakistan ordered six SX-404s to a slightly modified design. The Pakistani Navy deployed its six boats against the Indian Navy during the 1971 war. One of them, reportedly fitted with external torpedo tubes fired on an Indian naval frigate, INS Kukri, but the torpedo remained stuck in its external launcher. Of the six, one was lost with all hands as a result of an accident on December 27, 1976. Following removal from service, four were scrapped and one was placed ashore as an exhibit in the Pakistan Maritime Museum in Karachi. 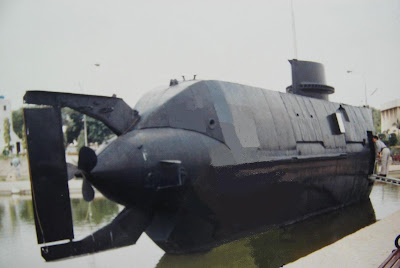 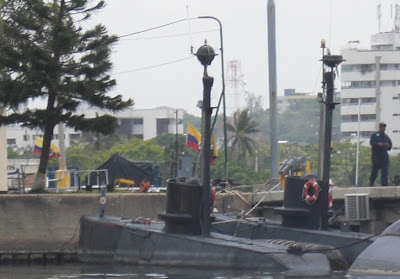 One of South Korea's two SX-506s prior to delivery
source: Cos.Mo.S SpA
Posted by Adriaticus at 9:41 PM