MSC 'Sleeping Beauty'
Motorised submersible canoe (MSC) first developed for SOE in WW2 and used in sabotage attacks similarly to X-Craft. The design accommodates a single frogmen, although on occasion two crew were employed with the second frogmen lying on the bow. Various configurations were tried with the greatest external differences being the positioning of the hydroplanes, which were initially aft but often moved forward. Some versions had hydroplanes both fore and aft. Small trim tanks were assisted by longitudinal movement of the batteries. Control of the craft was very difficult. 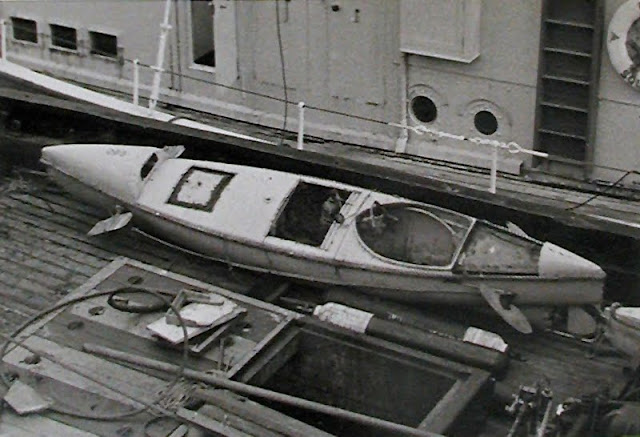 Photo: www.seayourhistory.org.uk
The craft was employed by SBS after WW2 and can be argued to one of the main forerunners of the current SDVs. 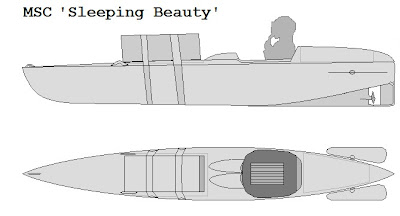 Excellent further reading http://www.mcdoa.org.uk/News_Archive_25.htm . Additionally this picture is very interesting (Welfreighter site)
Welman
A relatively unsuccessful design, the Welman single seat midget submarine was developed in WW2 for sabotage missions. Over 100 were produced but only one combat mission was run. Among the deficiencies, amazingly the sub lacked a periscope. The warhead was mounted in the nose much like the Chariot (see below).

Photo via http://www.cornwallmodelboats.co.uk/
Chariot Mk. I
Directly inspired by the Italian slow running torpedo (SLC-200 "Maiale") which was successfully employed against the British fleet in the Mediterranean in WWII, the Chariot Mk.1 followed the same general arrangement but used a British 21" (533mm) torpedo as the base. Due to the R&D advantage of a salvaged Italian example, the first craft were operational within 7 months of program initiation in 1942. Despite this much experimentation was required to ready the tactics and operating procedures to employ the craft operationally - in particular RN Chariots typically operated in much colder environments than their Italian counterparts.
The superstructure was slightly more substantial than the SLC, with a more faired rear locker. Performance was comparable.

Specification:
L - 6.8m
W - 0.88m (body 533mm)
Speed - 2.5kts
Operating depth - up to 27m
One notable operational difference was that the British supplied the frogmen with pure oxygen which can be fatal, and probably cost the lies of some crewmen. Otherwise employment was very similar to common Italian X-MAS tactics with transit to the target area by means of large storage bins bolted onto the outside of submarines. See more details on the Italian SLC HERE. Plans HERE 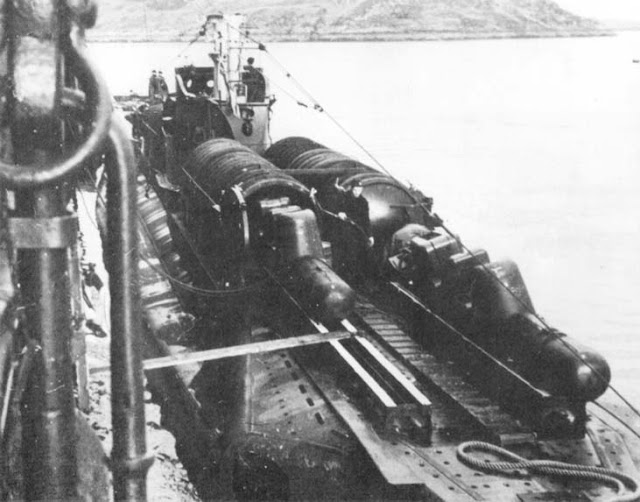 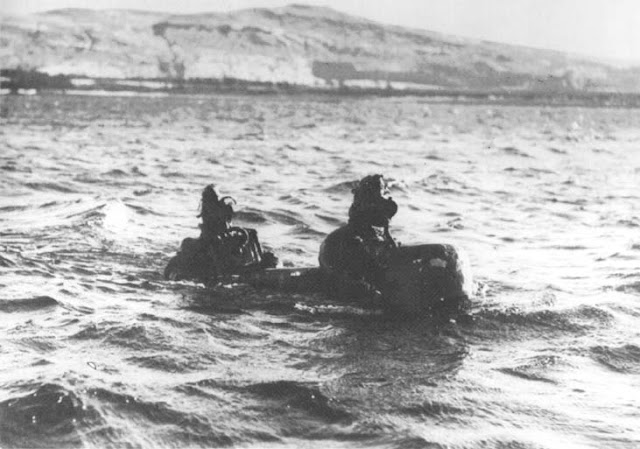 Photos via www.bismarck-class.dk. Top: Chariots in transit containers aboard a submarine. Lower: Running awash.
Chariot Mk. II
Almost before the Chariot Mk I was operational, work was already underway on a much improved craft with the crew sitting inside the chariot rather than astride it. The crewmen sat back-to-back, a layout subsequently echoed in some other types. The warhead was still in the nose and general operations were conducted in the same way.

Welfreighter
Kept a secret for many years, the story of the Welfreighter spy/saboteur infiltration craft has only recently become known and is still clouded with some uncertainty. Developed in WW2 for the Special Operations Executive (SOE), the Welfreighter was in concept a small midget submarine which, when on the surface, had the appearance of a small fishing boat allowing it to run on the surface during most of the operation. In many ways the design is a precursor to some North Korean infiltration craft which use similar deceptions.
The craft had a diesel engine for surface running and used electric motors, driving separate props, for underwater operation. A protracted trials period with some friction between SOE and Naval architects (the craft was not designed by the navy and did not fit navy norms), created several iterations with successively better performance. A key performance field was range, allowing good operational autonomy.
Specification
L - 11.2m
Speed: 5-7kt surfaced, 2-3kt submerged
Range: About 1,000 miles (longer in ferry mode)
Underwater endurance: Up to 40hrs with 6 persons. About 15 miles range on batteries.
Load: 2-4 agents and approx 2,000lb of stores (depending on mission/version)

about 25 boats were built but it does not appear to have been used in any operations and does not appear to have been in service post war.
Almost certainly the best internet source for this craft is: http://www.welfreighter.info/
Cockle Mk II Canoe
Made famous by Operation Frankton in WWII when six Mk IIs were employed in a daring commando attack on the port of Bordeaux (See Cockleshell Heroes), the Mk II is two-man folding kayak design allowing transit within an unmodified submarine with exit via the main hatches. The canoe is made of canvas with a wooden frame. Although less sophisticated than submersibles, canoes can offer some advantages in certain mission profiles where minimal draught (ideal for shallow rivers), ease of crossing land obstacles and less training are required.

Specification:
L - 4.6m
16m VSV
Vosper-Thornycroft (VT) Halmatic built at least one 16m long very slender vessel (VSV) in late 1990s to a modified Lurssen design similar to those operated by Indonesian Customs. The company is now closed and there are reports of the craft being retired.

In concept the VSV is a wave-piercing design capable of high speeds (est 60kts) even in heavy seas. Similar VSV designs are in service with US special forces but no military appears to have adopted them in large numbers. In service with the SBS the craft is suitable for insertion and boarding duties.

Stealth 'Beauty'
Produced by VT Halmatic shortly before the company's demise, this craft is rumored to have replaced the VSV although augmented is more probable. The craft's designation is not known and some observers have labelled it the Beauty due to its clean lines. The hull is not wave-piecing and features stealth lines.
The rear deck is often covered, with a large tailgate aft for easy access. The working deck appears suitable for swimmer vehicles (such as Stidd DPDs), canoes or dingies.

Photo www.dailymail.co.uk
It is possible that the craft is semi-submersible. At least two craft have been delivered.
Additional good photos: HERE and HERE