This was one of World War Two’s longer-running mysteries, finally solved. This is one of a pair of two-man submersibles that were designed and built for the OSS (Office of Strategic Services, the U.S. wartime intelligence agency) in Connecticut in May, 1945. Code-named “GIMIK,” these vessels were the infiltration assets for a clandestine operations program devised and headed by Colonel Carl Eifler called Project NAPKO. NAPKO’s purpose was to recruit and train 55 Korean Americans and Korean Prisoners of War for infiltration into Japan to collect intelligence and conduct sabotage in advance of Operation Olympic, the planned U.S. invasion of the Japanese home islands in late 1945. Korean POWs were targeted as Korea was at that time under Japanese occupation, and Colonel Eifler correctly believed that Korean nationals who had been inducted into the Japanese military, and then captured by U.S. forces during the Pacific campaign would be inclined to turn against their colonial masters in order to help shorten the occupation of their country.

NAPKO’s original plan called for three boats, however only two were actually built, costing $20,000 each. Gimik had an operating radius of only 110 miles, and was intended to be transported to its destination by a mothership to a point off the enemy coast, and then take its operator and a single infiltrator passenger ashore. When operating in the infiltration mode, the craft ran as a semi-submersible with its deck awash until reaching a point close to the landing area. Upon arrival at this point, the crew would submerge the empty vessel to a depth of up to thirty feet, where it could remain underwater for a period of up to three to four weeks while its crew was ashore carrying out their mission.
The two GIMIK boats were delivered to the OSS on June 10, 1945. Following delivery, they were used to train Project NAPKO crews at the OSS training facility at Catalina Island, off southern California over the summer of 1945. NAPKO’s Korean operatives repeatedly penetrated the harbor defenses of both Newport Beach and Los Angeles undetected, as well as landing agents at Newport Beach and San Clemente during their operational workups.
Preparations to execute NAPKO continued until the scheduled departure date of August 26, when Col Eifler and his teams were to depart for their overseas base, probably located at Kerama Retto, Okinawa. In summer 1945, Okinawa was the closest Allied-held territory to Japan; Kerama Retto had served as a base for both Japanese Army and Navy explosive suicide boat units. Following occupation, Kerama Retto served as a major advance support base for Allied forces in preparation for the upcoming invasion of the Japanese mainland.
After arrival at Okinawa, Eifler and his Korean agents would board a US Navy submarine and rendezvous off the coast of Japan with GIMIK and its mothership, which had been previously staged at Okinawa for the operation. At the rendezvous point, Eifler and another agent would board one Gimik boat, and presumably another pair would board the other boat. Japan’s surrender announcement on August 15, of course, put an end to NAPKO’s deployment.
With the end of hostilities, Gimik was forgotten and left in storage for a number of years, until it was found in 1972. Based on a magazine article from the mid-1980s, it was originally thought that the boat was found in Okinawa, however, recent research leads us to believe it had been in storage at the U.S. Naval Base, Newport Rhode Island. Because of its odd configuration, and a complete lack of documentation, it was thought to have possibly been a captured Japanese suicide boat, albeit one that really didn’t match the major Japanese types. The boat was restored and placed on display in the PT Boat collection at the Battleship Massachusetts, where it was displayed as possibly being a Japanese suicide boat, but heavily caveated with the fact that nobody really knew its identity. GIMIK remains on display at Battleship Cove to this day, now finally definitively identified.
Specifications and Technical Description:
Builder: Not definitely identified, but likely Electric Boat Company, Groton Connecticut
Length: 19 feet, 2 inches
Beam: 5 feet, 3 inches
Height: 6 feet, 9 inches
Weight: 3,650 lbs.
Engine: Gray Marine 4-cylinder gasoline type with Autolite spark plugs
Performance:
Speed: Awash: 4.7 knots, Surfaced: 4.1 knots
Economical: 2.5 knots
Range: 110 nautical miles
Crew: 2-3
Cargo: 110lbs of equipment
The engine is sealed in a large steel pipe with an access hatch in the upper surface. The forward end of this pipe forms part of the aft crew compartment bulkhead. The fuel tanks are aft of the engine, while a small stack aft of the cockpit provides both air intake and exhaust for the engine. The large tube forward of the cockpit is the air intake for the crew compartment. The air pump is operated from a 3-belt V-type drive attached to the propeller shaft. Trim tanks are located at each end of the boat and can be operated while underway, the boat being designed to run awash. A muffler, by Maxim of Connecticut, is installed for quiet operation, and the cockpit is covered with a well designed hood of 3/8 in plexiglass. There are four small compartments in the bow and what appears to be piping running aft to the cockpit. 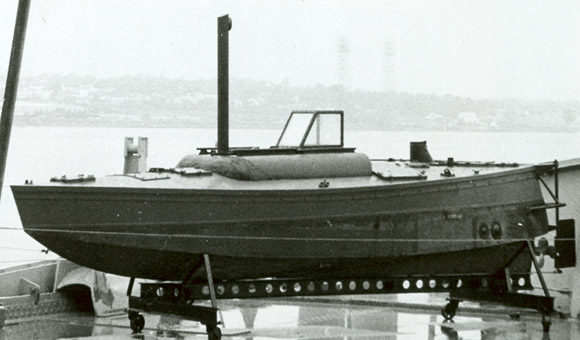