This is likely to be an ongoing project to catalogue and illustrate Latin American narcotics SPSS' (Self-Propelled Semi-Submersibles) so if it appears incomplete when you visit, please consider checking back occasionally for added material. We are looking at these boats from an equipment standpoint - for fuller histories and info on the narcotics trade there are lots of sources out there. These are not military units but relevant to the topic of covert naval equipment in general, and certainly of interest to the authors. Each craft is built to order in jungle factories and unique, but certain themes and techniques hold true. Exact data is hard to obtain.
There are many ways to categorize, divide up and "slice and dice" these craft. From an evolutionary standpoint there have been three phases:

Additionally these craft can be divided by type:

Type 1: Fully Submersible
- Type 1A: Submarine with self propulsion etc. The most advanced and consequently expensive to create type. These are very rare although a handful have been captured. There doesn't seem to be any evidence of successful operation of this type but analysis of circumstantial evidence suggests that these are increasingly employed.
- Type 1B: Towed 'Torpedo' - covert transportation canister towed by disguised vessel.

Type 2: Semi-submersibles capable of ballasting down to lower their surface profile, and controlling their running depth, but not fully submerging. These are also very rare with only a few ever captured.

Type 3: Low-profile vessels (LPV), which are often misdescribed as "semi-submersible" and constitute the vast majority of these vessels to date. Simply a boat designed to run awash to minimize radar cross-section. 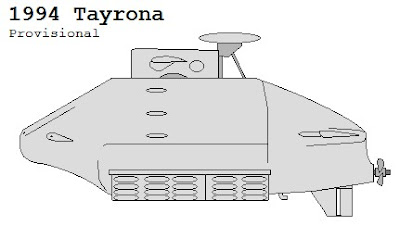 A small boat, made of wood and fibreglass captured in Tayrona, Columbia in 1995. Found to be unstable when tested by authorities. Fit for shallow submergence only with depth controlled by lead weights externally mounted on lower hull. Had advanced communication and navigation equipment. 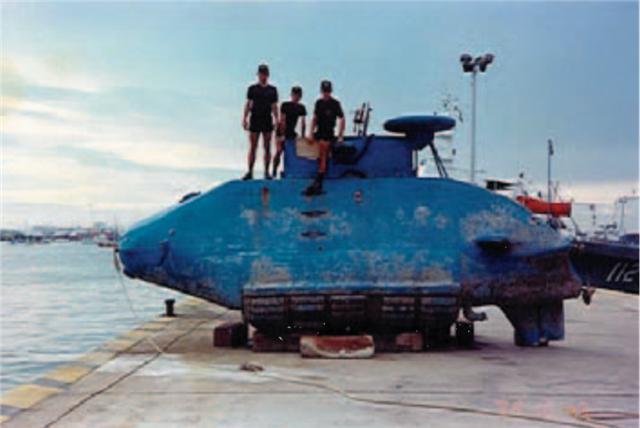 As the name suggests, this craft was captured in 1995 at the northern coast port of Cartagena in Columbia. This submarine is relatively advanced in some respects with a cylindrical steel hull suggesting the intention to operate it at deep depths relative to the fibreglass boats. Although unfinished, it is not clear how depth was to be controlled - the lack of ballast tanks or the water inlets/outlets associated with them suggests maybe lead weights were to be used as per the 1994 Tayrona boat.

By far the most advanced design captured to date, this appears to be the work of Russian advisers and has many features similar to real military diesel-electric submarines. The boat was to be 'double hulled' with a single shrouded screw. Crew is thought to be up to 12 persons. Construction cost is estimated at 10 million USD.

If completed this sub would have been capable of extremely long ranged missions and would have operated similarly to a military submarine. 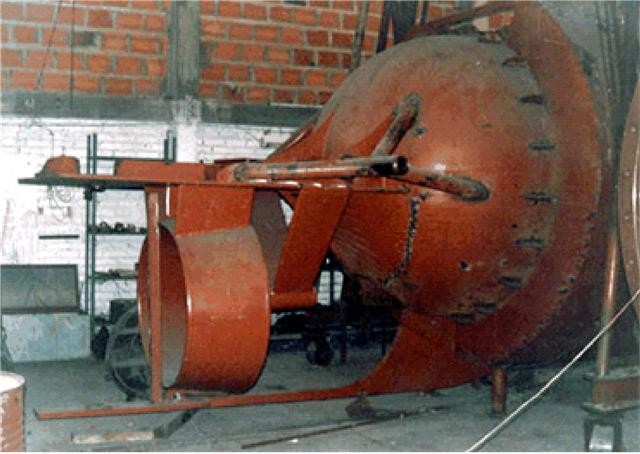 At 30m long the Facatativa boat is about the same size as an MG-110 or IS-120 military midget submarine. The Facatativa boat has a greater internal volume that either of these boats with a larger diameter pressure hull. The pressure hull also appears to extend almost the full length of the boat, maximizing storage space. The narco sub would likely have depth sonar, satellite comms, GPS and a navigation radar - advanced stuff but not comparable to the military boats. Additionally as a cargo carrier the Facatativa boat does not have torpedo tubes or it seems diver lock-out facilities. 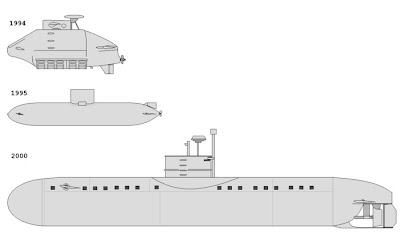 Captured by Spanish Police on the Atlantic coast, this submarine is thought to be locally produced and not closely related to the Colombian subs in design terms. The boat is made from steel with ballast tanks on the flanks. An interesting design feature is the use of separate props for the diesel (main) and electric drive. The craft was likely intended for short transits between the cargo ship and shore.
2010 Ecuador 30m Sub
L - 30m, W - 3m

A large fibreglass submarine, with diesel-electric drive and twin screws. The construction limits it to shallow submergence, but it is clearly designed for underwater operation. The lower hull on the attached sketches is speculative. The pilot windows in the base of the sail are very similar to the cockpits of recent low-profile boats. The boat was painted in multi-tone camouflage. 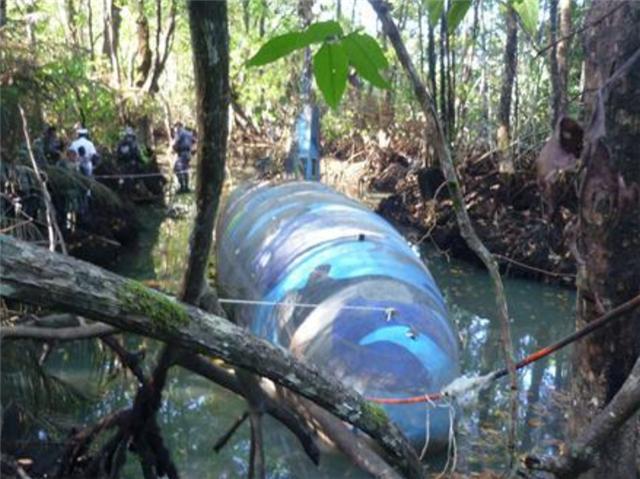 Nacro-torpedo
Designed to be even harder to detect than low-profile boats, but cheaper than proper crewed submarines, the 'torpedo' is towed behind a boat (disguised as a fishing, commercial or leisure craft) at a depth of about 30m. The torpedo is released if the authorities approach, and discharges beacons after a set period of time to allow recovery by a back-up boat after the authorities have left the area. 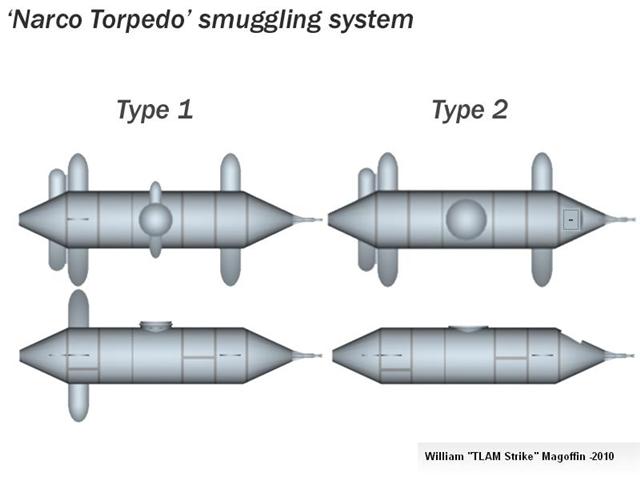 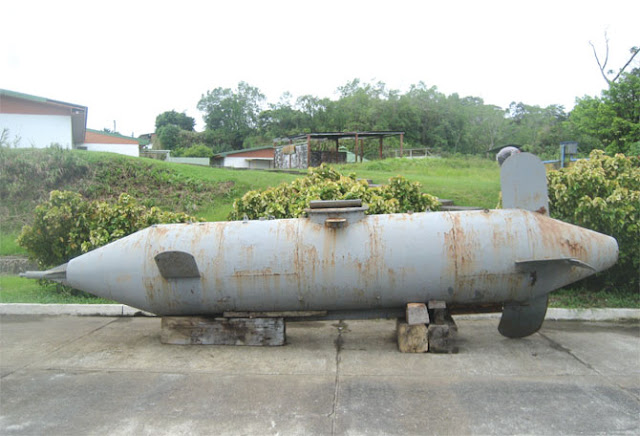 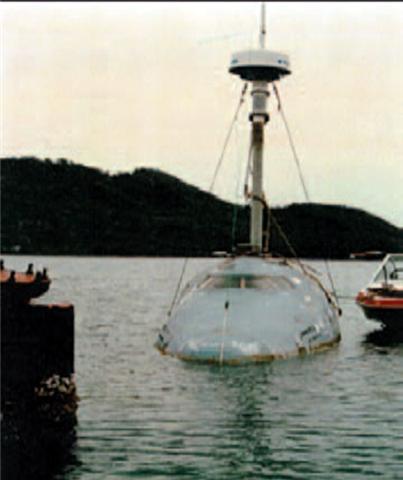 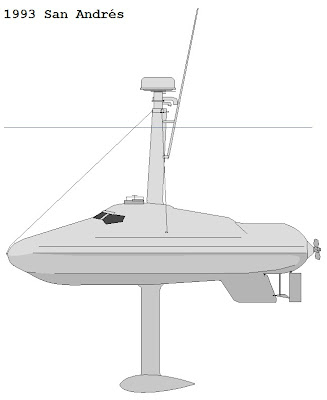 The only true semi-submersible captured to date, this early type was constructed largely of wood and fibreglass.

Example captured in Feb 2008. At least one very similar craft (almost certainly a 'sister-ship') scuttled during capture since. Distinct from other low-profile boats in capability to trim running depth via hydroplanes at rear. Possibly equipped with internally water ballast to further assist. Much lower profile than most low-profile boats with nose completely submerged even in calm seas. Metal construction implies re-use, relative to the one-way M.O. of most fibreglass craft. The faceted hull form does not offer deep-diving capability as would a cylindrical pressure-hull found on a true submarine. 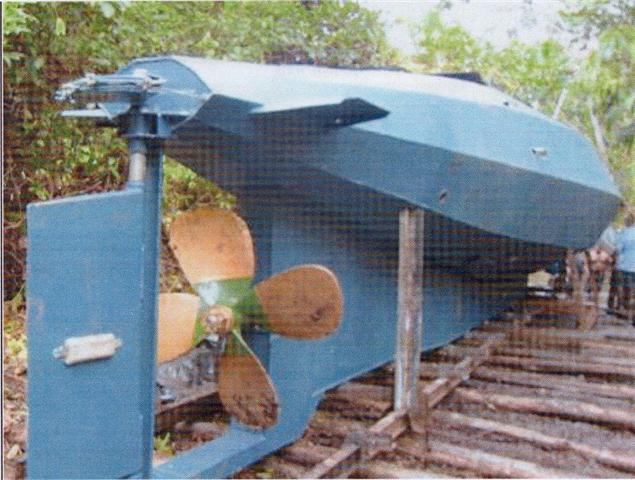 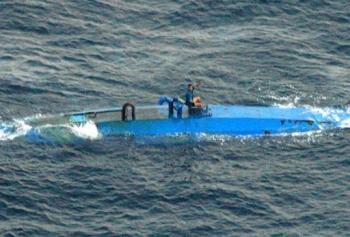 This second example has slightly different piping, but is otherwise similar.

Between 2001 and 2005 there seems to have been a sharp drop in activity, then in late 2005 low profile craft started to be captured again. Over time the above configuration has given way to a more specialised hull form with generally pointed bow and stern, with tiny cabin amidships with engine compartment rear and cargo in every available space. Features like sloping sides to the cabin suggest radar stealth, but other features contradict this design consideration - stealthiness is primarily provided by simply being low in the water and being largely fibreglass.

This craft is unusual for its twin engine, twin prop arrangement, but otherwise is a generic low-profile design. The craft was captured in March 2006 near Pital on the River Timbo outside Buenaventura, Columbia. 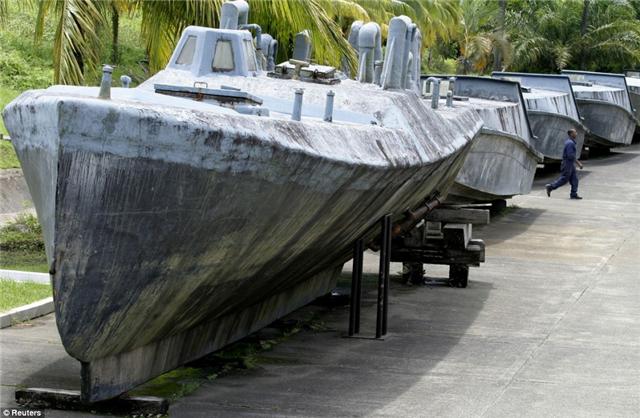 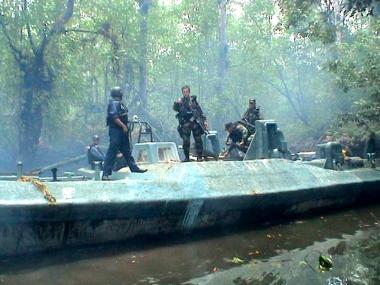 'Bigfoot-1'
So-called because "narco-subs" were widely reported but within the US military no-one had actually caught one. That changed with the capture of a low-profile "sub" in November 2006. US forces had seen the earlier craft captured by the Colombians so the design was not that unexpected. Bigfoot-1 is quite different in shape to the more common hull design (typified by Bigfoot-2), having a rounded hull, but it is not unique in this characteristic either. 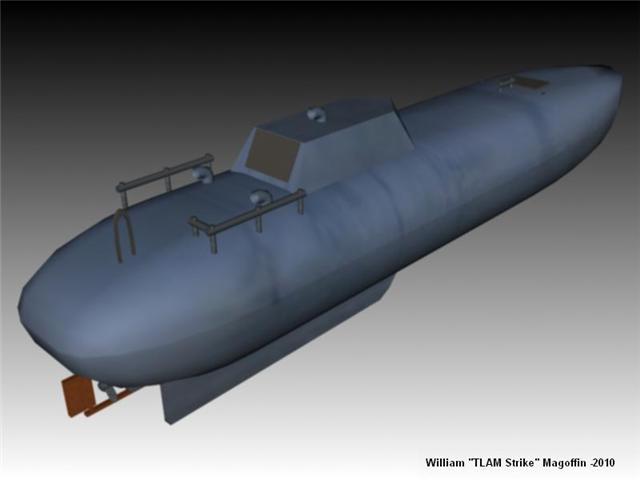 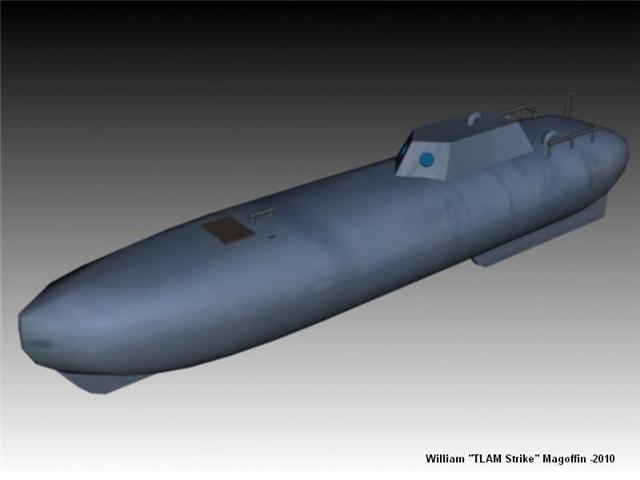 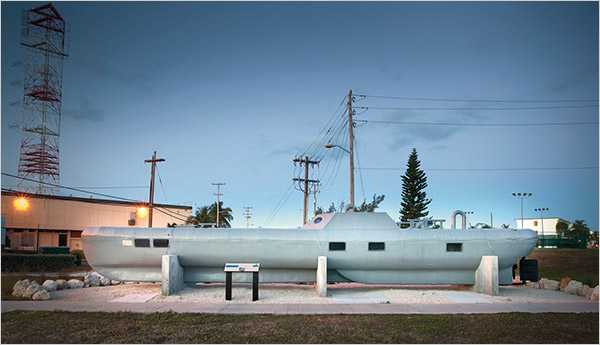 Although narrower than the Bigfoot-2 type and only slightly longer, the rounded cross-section of this craft gives it a much larger internal volume and load capability than most other low-profile boats. The design is twin engine with twin props. Although unconfirmed, some believe this boat may have been built for longer distance trips from Columbia to Europe or Canary Islands from where the load could be transferred to vessels waiting offshore. 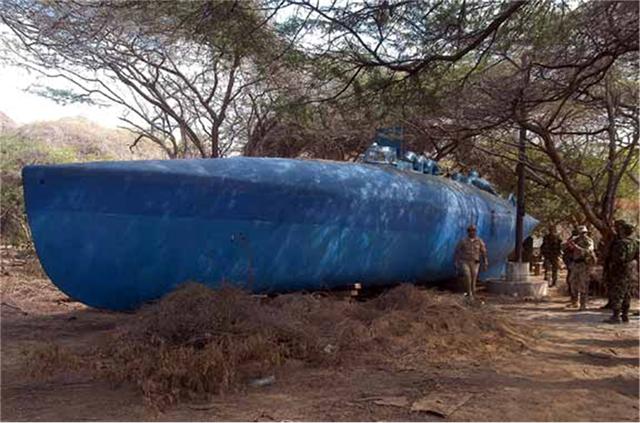 A remarkably similar boat was captured a couple of months later, suggesting the same designer: 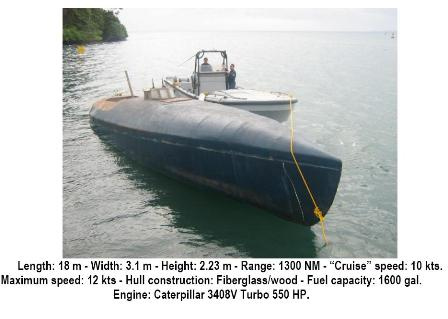 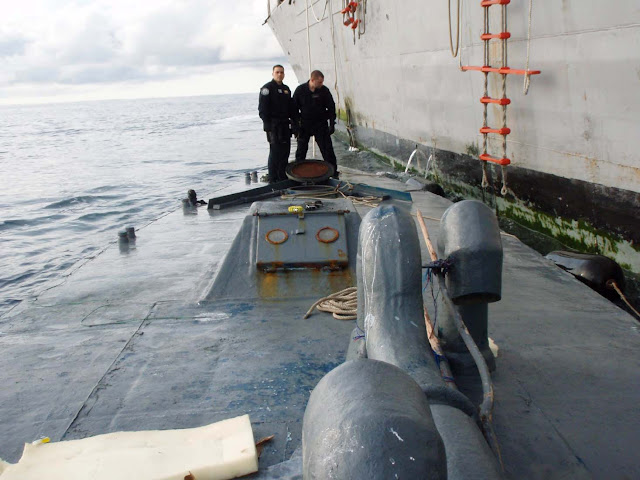 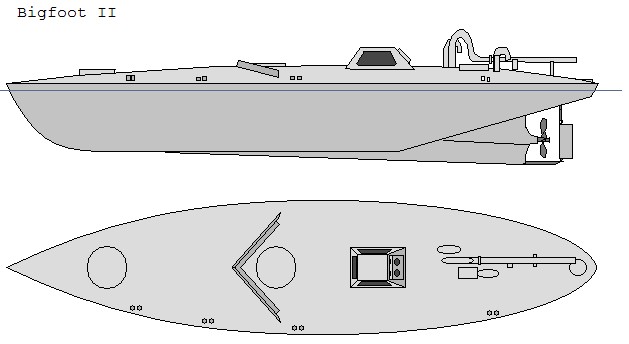 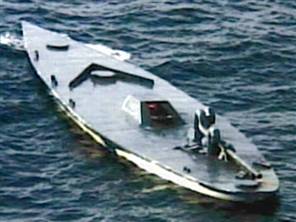 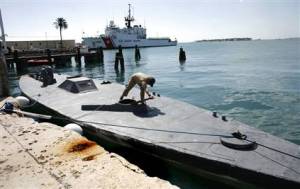 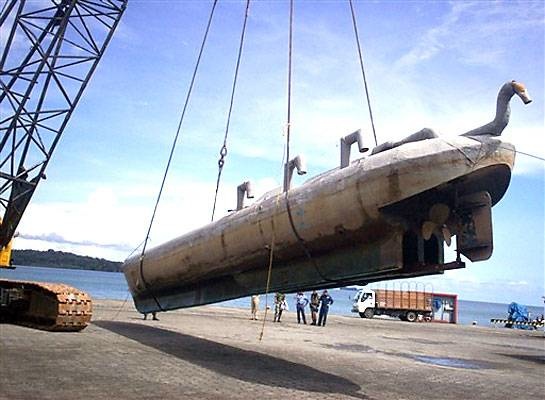 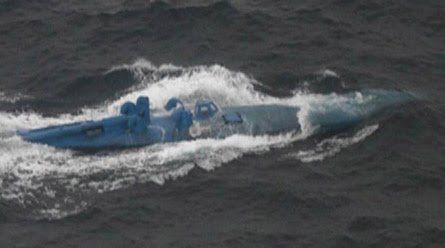